Qubie is your work coach. It's helping you and your team perform better at work by analysing and giving targeted recommendations.

Identifying the issue is a very important first step. Our problem was quite challenging. Questback needed a new solution to move from a B2B consultancy to a SaaS business with an out of the box web app. The survey landscape is changing and since companies have a shorter and shorter lifespan, they need to understand their organisation better and quicker. We needed a tool that observes the organisation, identifies the issue and most importantly helps you improve by suggested actions and ideas. This is how the idea of Qubie was born. I also started a research and found that our main competitors are quite a few:

Some would say that Qualtrics and Surveymonkey and many more are competitors, but they are more focused on surveys, where we wanted to distance ourselves from them. Another thing that differentiates us from Peakon and the rest is that we actually give you good recommendations on what to do next.

Teams work great when there are no issues, but most of us don't even know we have issues until someone points them out. Although there were a lot of tools, no one really gives you a good idea about what to do next. Also people hate surveys. We saw an opportunity and grabbed the opportunity. I remember one of the people I interviewed later said:

People don't wake up and think... oh I feel like having a survey today. No they only want to see results and ideas on what to do with them.

We decided to build a tool that addressed these two things. First, make sure it continuously listens to your team and organisation without making it feel as if you're filling in a survey. Second, make sure we give them good ideas on how to improve their score. And lastly, make it damn easy to use.

We started by putting all of these ideas onto one of our walls and started ideating how the flow should look like. The main idea was there: Listen, identify the problem, dive deeper into the problem and suggest improvements. The first main task was to see how the so called "Guides" would work like and how you initiate one. A guide is basically some tailored questions that help identify issues with your team, or leadership skills, or anything else really. By packiging them up we could simplify the flow of getting feedback from people who don't know anything about surveys, but want to improve their team.

Slowly that transitioned to something more tangable which we could then start working from. One thing that became quite clear early on from our user testings is that people needed a good onboarding as well as a demo with fake data which they can play with. They needed a way to buy into the product and invite more people. 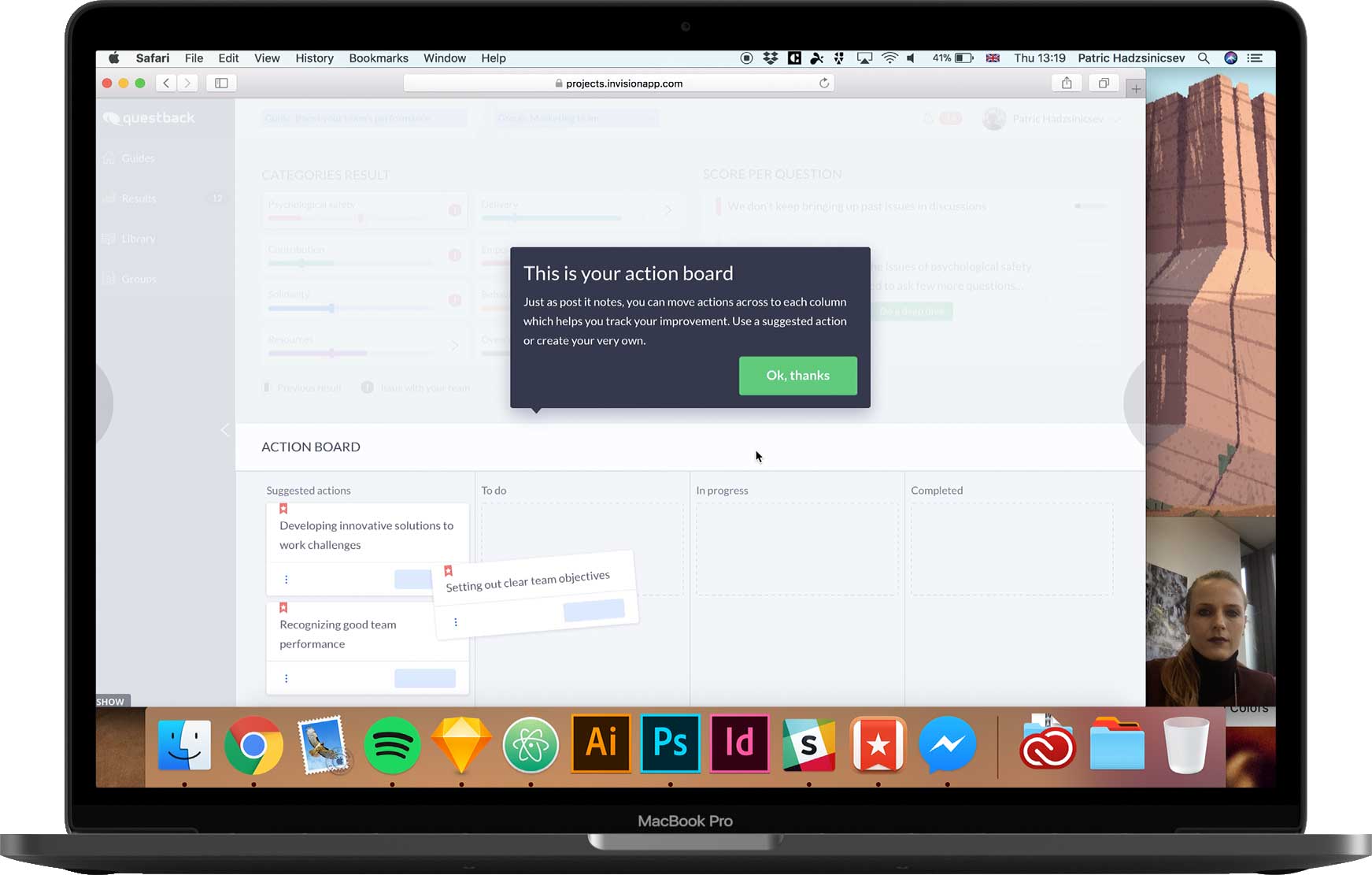 Another interesting insight was that people really valued the sence of progress. Although the web app can do a lot, the progress and clear steps indicating what's next helped make feel users at home throughout the product. Starting from the "Guide setup" all the way to the action board and "Library".

After we launched the MVP we faced three major issues. The first one was that there was no reason for people to start a guide if there was no issue with their team. But how do you know if you have an issue if you don't track or check your organisation about how they feel? This is how the idea of "Beats" started. It is a simple question sent out every week about how people feel and why. If a certain aspect scores low, let's say "team performance" then Qubie recommends to run a "team performance" guide to understand where the issue is and recommend actions.

The second issue we had was that users weren't sure the answers are confidential and overall the questions had inconsistent behaviour. That's why we decided to look into how we present the questions and make sure they feel safe when answering questions.

Then the third one was that people were still a bit lost on the results page as we were trying to show too many things so we ended up iterating quite a lot until we nail it. Along the way we got some pretty good insights from customers we tested with.

Knowing how different regions across the company feel is amazing especially for me as an HR operating from Germany. - Continental

Lastly, we confirmed the fact that we had to improve our onboarding, as a big chunk of the invited people would forget to sign up, or wouldn't invite too many of their peers and the only way for them to see the value of Qubie was to get as much involvment and responses as possible.

With that in mind we changed the whole onboarding process, how you invite people as well as the full mail flow that you go through as a new user. That not only improved the experience, but also increased the amount of people that would sign up a week after the initial invite.

We wanted to make it easier for people to respond to questions so we decided to work on a native app that could show you the results but also be able to answer questions on the fly from your mobile as well as being able to send out "Quickies" which are quick questions or polls to your team. Another thing we started looking at how a Qubie chatbot could do the same basic health check and improvements in MS teams both of which I'll share soon. This is how we came up with our roadmap which became our ever changing north star.